It’s time for Equal Justice for everyone in San Mateo County, including “Those Who Matter.”

Please join us July 26, 2018 at 9:00 AM in San Mateo County Superior Court for former Sheriff Deputy Juan P. Lopez court appearance where the Hon. Judge Forcum will rule on this filing. Think about it Corrupt from day one, almost 4 years trying to ruin a good man, his family and friends.

Why hasn’t San Mateo County Sheriff Detective Andrew Armando been investigated outside of San Mateo County yet? Why no media coverage of this Motion filed with the court on May 1, 2018 in the Former Sheriff Deputy Juan P. Lopez case stated, “Detective Armando Perjuriously alleged that Mr. Lopez placed a telephone call to the Contraband Cell Phone in Order to Obtain a Search Warrant.”

Det. Armando is the guy who made the suspicious phone call himself. He lied to  Judge George A. Miram to get the Search Warrant. That is a Felony.

How is he (Andrew Armando) still employed by San Mateo County? Why has he not been arrested and charged?

The reason we have included the article below is simple. If the San Mateo County Sheriff’s Office and the District Attorney’s Office are willing to falsify affidavits to the Judges to frame one of their own former Sheriff Deputy Juan P. Lopez, What makes you think they wouldn’t do the same for the people in the article below. 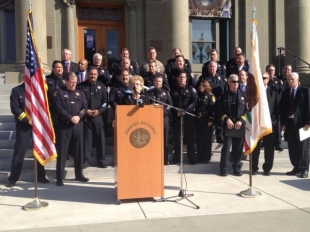 Four people who testified in cases relating to the San Mateo County District Attorney Office’s “Operation Sunny Day” case, under which 16 alleged members of three East Palo Alto gangs were arrested for a string of violent crimes, were arraigned this week on perjury charges, according to the district attorney’s office.

One of the four charged is an East Palo Alto resident and mother of defendant Miguel Rivera, who has been charged with the October 2012 murder of 21-year-old Christopher Baker in East Palo Alto. According to the district attorney’s office, Betty Jo Rivera, 52, provided a false alibi for her son to the police and then lied about the false alibi and alleged cover-up efforts to the grand jury. She was arraigned on Monday, Aug. 17, and her bail has been set at $500,000.

The district attorney’s office has also charged Joel Santana, 20, of East Palo Alto for stating during the grand jury proceedings that he did not know and had no contact with defendant Tyrone Love-Lopez. Love-Lopez has been charged with the killing of 21-year-old Lamont Coleman in East Palo Alto on Jan. 26, 2013. An investigation revealed cell-phone communication between the two men before and after Coleman was murdered. Santana also had Love-Lopez’s contact information in his cell phone, the district attorney said.

Thirty-nine-year-old Germina Lapria Sturns of Hayward, the girlfriend of defendant Raymond Bradford, was arraigned Monday for allegedly lying several times during her grand jury testimony about her knowledge of Bradford and guns that he owned, the district attorney said. She also allegedly violated a court order not to discuss her testimony with anyone by visiting Bradford in jail in the days following and talking to him about it.

On Tuesday, 19-year-old Victor Manuel Galvez of Redwood City was arraigned after testifying at the grand jury proceedings that he was not a gang member and had no friendship with or knowledge of any of those convicted as part of the county’s “Operation Sunny Day” prosecution, according to the district attorney’s office. He also denied ever being on Sacramento Street in East Palo Alto — an area associated with the “Sac Street” gang. Police wire taps recorded Galvez talking on a cell phone to several “Sunny Day” gang members, and police also found photographs of him standing on Sacramento Street, according to the district attorney.

All four charged with perjury remain in custody and will next appear in court on Aug. 26.

The grand jury investigation that resulted in the 16 arrests began in early January and took two months. The indictments were announced in late March. The alleged gang members are being blamed for a string of violent crimes that stretched from East Palo Alto to San Francisco, starting in September 2012 and continuing through December 2013.

Dubbed “Operation Sunny Day” after the code the persons arrested allegedly used to signify when a murder was successfully carried out, the 18-month-long investigation is the most massive case prosecuted by the San Mateo County District Attorney’s office in its history, District Attorney Steve Wagstaffe said at the time of the announcement.

Fourteen defendants appeared in court to enter their pleas in mid-June. Three of them — Roberto Gabriel Bustos-Montes, 24, of East Palo Alto; Emmanuel Imani Hyland, 25, also of East Palo Alto; and Palo Altan Nina Cragg, 24, — will not face the death penalty but could still receive life in prison without parole if convicted of the capital murder charges, Wagstaffe said in June.

5 responses to “It’s time for Equal Justice for everyone in San Mateo County, including “Those Who Matter.””