It amazes me how much work you put into campaigns that have zero impact on helping real victims of sex trafficking.  In 2006 I was approached by a group of sheriff’s who were using the sex trafficking movement to traffick women, and make sure they had no escape. Escape I had been providing since 1984. I brought all of the evidence on the operation to the proper authorities,  including Polaris,  and the end result was they cleaned up everything in my file and moved everyone. I went to the state dept., and the salvation army who agreed to fund and create a system to address this group of people that no other cop wanted to prosecute nor a judge prosecute and gave Nevada a million dollars to create atlas with me scheduled to be the director.  We staged our first raid deliberately scheduled to catch two San Mateo Sheriff’s who made a bimonthly drop in April of 2007. Validating what i had been saying, two San Mateo County sheriff’s were caught red handed along with bags of drugs, a juvenile and 24 victims. They were brought to the salvation army where I was supposed to question them during a mandatory 72 hour immigration hold. To my shock, the victims were sent right back to the houses, and the cops released. I was completely shut out of the whole system – replaced by Chris Baughman as a figurehead to fight sex trafficking. The reason this happened is because the Salvation Army sold out the 24 victims of operation dollhouse to metro for $370,000. George Knapp had seen my work and became curious. It took him a while but he uncovered some more misconduct. I knew homeland security and ice had to have been involved to release that hold so I pushed on ICE to investigate.  They uncovered Joohon David Lee and Chris butler.  Lee however was immune from all charges but bribery. I was validated yet again and even more so when Celeste Guap stepped forward in the press. She had no choice because we have no system yet that will take actions on cops unless you go to the press and convince them to write on the subject, and they won’t let you leave sex work for fear you’ll come against them. Because of Chris Baughman,  the fbi did start investigating what was going on. In fear what they would do, a judge, Terri Miller, Dennis Hof and myself were threatened. To protect my life I moved into an rv for 2 years I kept moving weekly. That was after a bomb had been found in my first rv.
Only now FBI Agent Kevin White has gone quiet and my emails were illegally seized by San Mateo County District Attorney Steve Wagstaffe the same man who protected those two San Mateo County Sheriffs April 21, 2007. Daniel Bogden, my only protector was fired.  With him gone, once they got my emails a sealed Search Warrant dated 7/2/2018, they figured out where I lived. The men involved in this trafficking network then bought the motel I live in brought in their own security to cover their ass and then metro came and tried to break my door down without a warrant November 12, 2018 9:20PM. 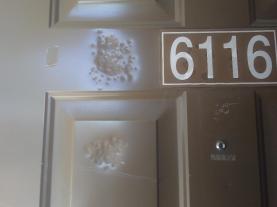 I don’t believe they (LVMPD) went to this much trouble to ask me a few questions.
I’ve appealed to Polaris on not only my behalf, but another woman who turned to the antitrafficking groups in Nevada, only to find herself being “recruited” instead of helped to exit sex work.  To date we have nothing. We haven’t even been called by Polaris – let alone protected in any way or anything being done about this. No lawyer will touch this either because they keep disbarring any attorney who steps up and arrests their paralegals.  BUT YOU GOT COSMO OFF THE WALMART AISLE! WOW!  What an achievement ! Only it does nothing to help these victims, and myself,  now in fear for our lives.