The reason I said I’m not surprised is Don Horsley is dedicated to supporting Sheriff Carlos G. Bolanos the employer of his son. Some readers might recall that I am the citizen that saved San Mateo County Tax Payers at least $250,000 when I encouraged Supervisor Don Horsley to get back on track and keep his political campaign promise that he reneged on which was to not accept the Supervisor salary if elected. The reason I was so interested in it was he said it several times sitting next to me when we both were campaigning for Supervisor.

When asked by Bay City News whether they supported a new citizens’ oversight body, only one of five of the county supervisors, former Sheriff Don Horsley, responded to say that he unequivocally opposed the idea. Why did the other Supervisors refuse to answer the question?

“I just don’t think that having an oversight body adds anything other than more conflict and I don’t think it would have solved anything” in Chinedu Okobi’s case, Horsley said. How would Supervisor Horsley know?

October 3, 2018 News Release: Below is a list of the names of the San Mateo County Sheriff’s Office Personnel who were involved in the critical incident on Wednesday, October 3rd, 2018. Deputy John DeMartini, Deputy Alyssa Lorenzatti, Deputy Joshua Wang, Deputy Bryan Watt, Sergeant Weidner. OMITTED from this list is the SIXTH Employee CSO Joseph Gonzales, Why?

Supervisor Don Horsley is unconcerned with Dishonest behavior by the Sheriff.

One thing Supervisor Don Horsley refuses to address is why did Sheriff Carlos G. Bolanos produce this False statement on October 3, 2018. “The deputy exited his vehicle to contact the suspect and the suspect immediately assaulted the deputy.”

This subject was never mentioned over the radio, on the video, or in any reports. Where did Sheriff Carlos G. Bolanos get this FALSE INFORMATION and why did he approve it and allow it to remain on the County’s website for 5 months until I asked Steve Wagstaffe about it at his March 1, 2019 Press Conference. He told me “You’ll have to ask the Sheriff Bolanos.” I have and he refuses to respond.

“I think it was good of them to correct the statement,” he said.

The Sheriff’s Office did not correct the statement they simply removed it from the Website and produced another false statement dated March 1, 2019

Horsley said that in addition to the use of force policy changes, the sheriff’s office has added implicit bias training and the county has expanded its mental health outreach.

“It’s understandable why the sheriff’s deputy thought they had to stop him,” Horsley said.

Stopping a person is one thing Killing a person and offering NO CPR for almost 10 minutes is something entirely different.

San Mateo County District Attorney Steve Wagstaffe at his March 1, 2019 Press Conference confirmed it was a Homicide. He said “The Coroner of this County Labeled it a Homicide.” He went on to say Homicide occurring during interaction with that individual.” That means the SIX Sheriff Employees.

Supervisor Don Horsley knows all of this information and he is Unconcerned and Uninterested.

The March 1, 2019 Lie by San Mateo County Government was Chinedu Okobi died after he was turned over to the Medics and they had him for Several Minutes, Both Sheriff Carlos G, Bolanos and Steve Wagstaffe are promoting that Lie.

I have asked Sheriff Carlos G. Bolanos to identify the MEDICS, He has refused. 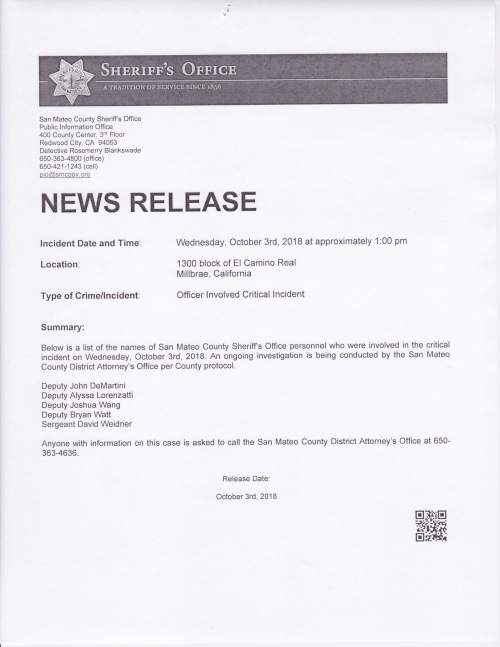 Alex Camron Hill 25 was struck by an out of control police car driven by Officer Angela Wittman responding to a call according to the Redwood City Department. He was reported to be in critical condition from that day. His identity has now been confirmed and he passed away October 2, 2019. My understanding is that his family has been involved and have requested privacy, which I understand completely.

Update 2/23/2020 Still no response from Sheriff Carlos G. Bolanos or Rosemerry Blankswade PIO for the Sheriff’s Office. Why?

Hello Rosemerry,
Could you please provide me with that photo or an explanation as to why the Sheriff’s Office does not think they need to.
Can you confirm his Driver’s License has been suspended for refusing the chemical test?
Is he on Administrative Leave or is he on his normal duty?
Thank You
Michael G. Stogner
San Mateo County News.com

Update: 10/24/2019 Congratulations to the Palo Alto Daily Post for their Front Page Story on Sheriff Sergeant Lou Aquino’s DUI Arrest on September 14, 2019. That is 23 days after the SMCN.com article. They are the only one of 7 Print Media in San Mateo County to inform the public. The San Mateo Daily Journal placed it on the Website version I asked Jon Mays if he published it in print copy he has not responded. Sheriff Carlos G. Bolanos and PIO Rosemary Blankswade refuse to even respond to my request for his Booking Photo.

Update 10/21/2019 There is no blood alcohol result because he refused to submit to a chemical test as required by law. This means for the ordinary resident your Drivers License is suspended for 1 year.

Update: 10/17/2019 Sheriff Bolanos and PIO Rosemerry refuse to even respond to my e-mail request for Booking Photo. Why? It’s public information.

I know when you read the date below you are going to think this is old News and you are correct. I will say that I am the first News Media to inform the public about it, this is an example of a Those Who Matter case. Special Treatment, What the public doesn’t know won’t hurt them etc. No statement from Sheriff Carlos G. Bolanos, No statement and even more important No Charges by District Attorney Steve Wagstaffe, Why?

Steve Wagstaffe informed me this morning 10/02/2019 that his office has not received the case from Redwood City Police Department and that would explain why No Charges if it were true, so I sent RWCP an e-mail. Gary Kirk responded RCPD filed the case with the DA’s Office on September 23rd. On September 27th, we received a request for additional information for prosecution from the issuing DA. You may want to call them back to clarify the information they provided. The DA’s case number is 0811082.

September 14, 2019 The Redwood City Police Department arrested San Mateo County Sheriff Sergeant Luis Dejesus Aquino for DUI last week after he crashed a car (not his) the car belonged to San Mateo County Sheriff Lieutenant Victoria A. O’Brian.  Location of arrest was Broadway/Arguello St, which just happens to be where the DSA building is located. The arresting Officers transported him to First Chance in Burlingame where he was refused acceptance reason being he was to “Belligerent”. He was than transported to Maguire Jail where he was booked. He had attended a retirement celebration at the Deputy Sheriff Association (DSA) Building on Broadway Street Redwood City, prior to being arrested. So much for “Friends don’t let Friends Drive Drunk.” or “Let me call an UBER, Lyft or a Cab for you.” Better yet “I’ll drive you home.”

His attorney is Josh Bentley. You might ask why do you need an attorney if No Criminal charges are filed? Who called Mr. Bentley and When?

Redwood City Police did respond to my inquiry of the DUI Arrest of Sergeant Lou Aquino and confirmed it. Thank you RWCPD.

SMC Sheriff Carlos G. Bolanos has refused to provide me with the Booking photo. He has remained Silent on Sheriff Sergeant Lou Aquinos’ arrest. Here is what he was saying just two weeks before the arrest.

“Labor Day should be a time for friends and family to come together to enjoy the last days of summer,” said Sheriff Carlos Bolanos. “We need commitment from our community members that they’ll keep the streets free of drunk drivers so that everyone can have a safe holiday. This is a campaign to get the message out that drunk driving is illegal and it takes lives. Help us put an end to this senseless behavior,” he said.

The San Mateo County Sheriff’s Office and NHTSA are reminding citizens of the many resources available to get them home safely. “Drunk driving is not acceptable behavior,” said Sheriff Carlos Bolanos. “It is essential to plan a sober ride home before you ever leave for the party. That’s why, during the Labor Day holiday, we will make zero exceptions for drunk driving. There are just no excuses,” he said.