Flooding Be Careful while driving, 2 people drown in car at a Millbrae, Caltrain Underpass.

Yesterday December 23, 2021, at approx. 6:00AM, 2 people died in a car that was submerged under an estimated 10 feet of water in Millbrae. The location was E. Hillcrest and Hemlock Ave. This is the main roadway into Bayside Manor Park. There are only two roads to enter or exit the Residential Neighborhood.

Do NOT drive into standing water.

We’ve become people who stand in front of a microwave oven, muttering, “Hurry up.”

Not an ideal mindset for an electoral process that requires patience.

Patience. What a concept. It comes in handy when you’re waiting in traffic or standing in line at Disneyland or, say, counting ballots.

Such as counting ballots in San Mateo County’s November 6 election, which is taking much longer than some people seem to think it should.

In a world of instant gratification, elections often are neither instant nor gratifying, although often not for the same reasons.

And for the sake of the permanent record, I want to state unequivocally that they should take their time and make sure to count all the ballots, even if it means waiting for the final outcome.

Yes, we’re used to election results on election night, but it’s not like that. Not this time. Not anymore.

COUNTING THE REASONS: There are a number of reasons why the count for this election is taking a while, most of them valid, some of them worthy of further question.

First, a lot of people voted in this election. As of 10 p.m. last Friday, the absolute deadline, a total of 271,704 ballots had been received by the county Elections office.

That’s also more than 20 points higher than the statewide turnout. When all the votes are counted, San Mateo County will be among the highest-turnout counties in the state, and among the top five highest in urban counties.

In other words, there was a huge turnout. The more ballots, the longer it takes to count them. 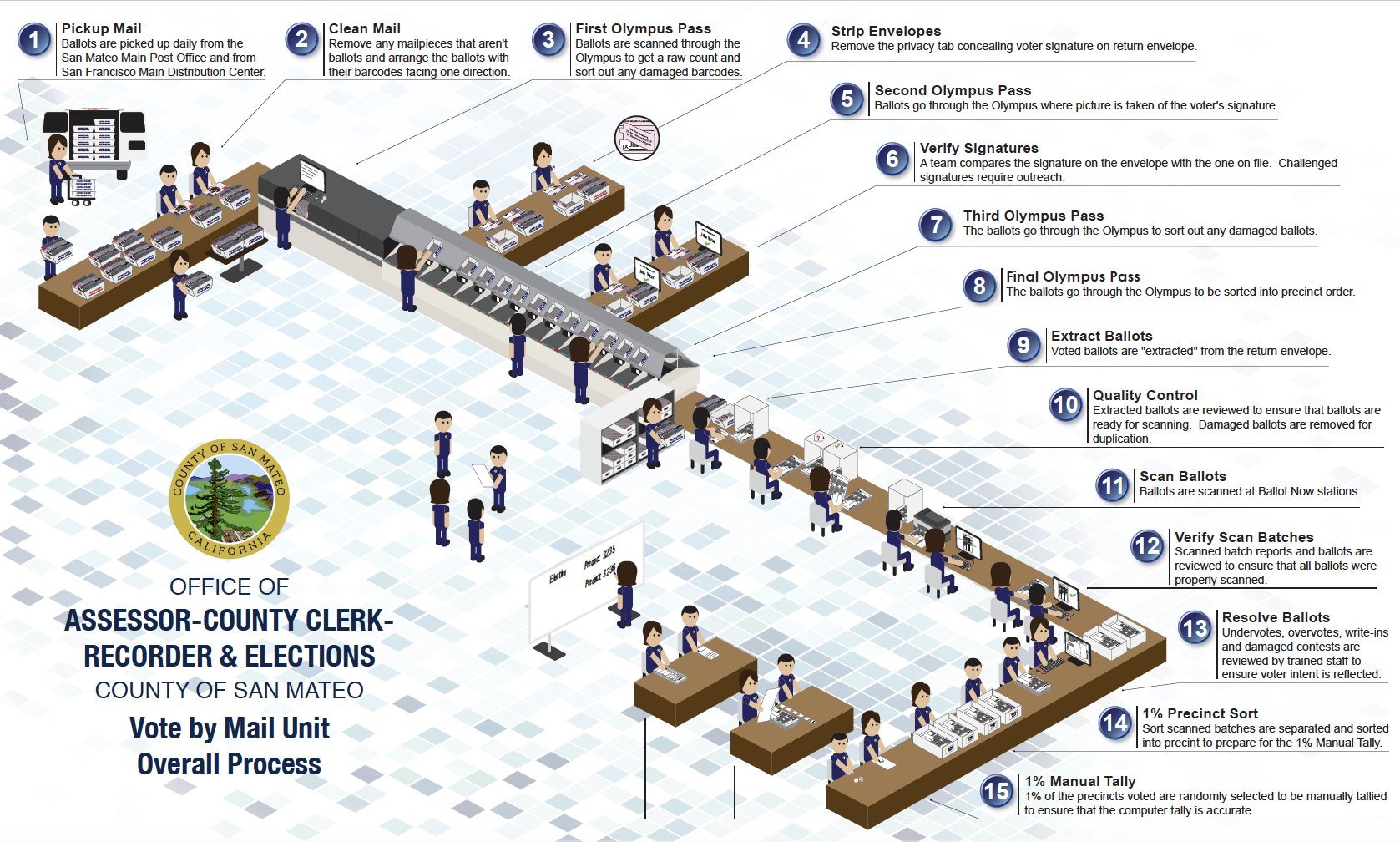 We are used to knowing the results right away. And why not? The run-up to the election took months of ads and mail pieces and all kinds of conversations. Why should we have to wait to know what happened?

And the answer is that this isn’t sports – we don’t always know the outcome the instant the clock runs out. To quote Yogi Berra, “It ain’t over till it’s over.”

And there’s another reason – it’s not just a huge turnout, but many of the local races are close.

Back in the days of all-machine voting, under the most normal of circumstances, some of these races were so close that we didn’t know the outcome until the end of November.

And these are hardly the most normal of circumstances.

AND BY THE WAY, WE DON’T DO THAT ANYMORE: The county has been shifting steadily away from voting by machine to voting by mail, or what used to be called absentee voting.

Then, we switched to this election’s all-mail balloting experiment.

Far from a great leap forward technologically, in reality, we went to a technology that more closely resembles voting in the 19th century, when voters made a mark on a paper ballot and stuffed it in a box.

In other words, we went from voting by machine to voting by hand.

When we voted at our local fire station, we slid our ballot into the machine and it was counted – right there, on the spot. We signed a book and no one checked the signature to make sure we were us. At the end of the evening, someone hit a button and the totals were instantly available.

Now, we vote by hand in our homes, sign and seal the envelope and deliver it, by mail or in person, to the Elections officials and we can mail it on Election Day.

Then, the mail has to be delivered, and someone has to open the envelope, cross-check the signature, and then manually slip the ballot into a machine that counts it.

It’s not quite that laborious – a lot of it is done by machines and scanners. But someone has to do the work we all used to do ourselves when we went to our precinct voting place.

It takes time to do it right.

THE BIG TRADE-OFF: The trade-off is more and better voting.

The evidence is plain, a huge number of voters turned out this year in the June and November elections. By any measure, that’s more voting and the assumption in elections is that more is better. Period.

Better voting comes in the form of a better-informed electorate.

Even with the shortened window of time during which the ballots were available in this election, voters had time to go over the ballot, research the often-confusing measures, find out a little more about the candidates and make deliberate, unhurried decisions.

If the cost is that it takes longer to tally all the ballots, it’s a trade-off worth making.

WE CAN DO BETTER: Still, there are some lingering questions about whether the San Mateo County Elections Department was prepared for the onslaught of ballots.

Interestingly, on the Peninsula TV election night show, Chief Elections Deputy Jim Irizarry brought some slides for his interview and one of them shows staffing levels in the Elections offices of the nine Bay Area counties.

San Mateo County is eighth, ahead only of Solano County.

There has been a lot of turnover in the Elections Department. Let’s be generous and assume it has been due to retirements.

I know from talking to people who have worked in the department that it takes two or three election cycles before a newcomer really has a handle on how it all works.

I don’t know if Elections Chief Mark Church failed to make a pitch to the Board of Supervisors, which includes his predecessor, Warren Slocum, for more funding for the Elections Department.

I don’t know if the Board failed to fund the department sufficiently, either at Church’s request or on its own initiative.

And I don’t care.

Moving forward, the department can do better and it needs to have adequate funds to hire the right number of people and to bring on board people with a level of experience that our elections system demands.

*The opinions expressed in this column are the author’s own and do not necessarily reflect the views of Climate Online.

Tens of thousands of San Mateo County residents? How many is that? Is this what $650K Taxpayer money used for?

Wednesday February 14, 2018 all trains came to stop for approximately 1 hour at 8AM. Caltrain has not identified what caused disruption yet.

San Mateo County Board of Supervisors give $350,000 of Measure A money to Samtrans to “Educate the Public”

Measure A was promoted to assure the public that Critical Services would continue. We are not sure how giving Jim Hartnett $350,000 to pay for outreach to see what is needed to pass a Tax Measure in November 2018 has to do with critical services. One of the speakers in favor of this terrible idea was Jim Hartnett’s wife, Rosanne Foust representing SAMCEDA. If the Supervisors had any interest in honesty or transparency they would have acknowledged that relationship upfront. SAMTRANS is spending a total of $650,000 for the Education Campaign. This is the same organization that had several accountants meet with the District Attorney’s Office to report that they were ordered to commit fraud, They told the DA where to find $2.5M and he did find it exactly where they said it was. The idea that Taxpayer money would be used against Taxpayers to pass another Tax Measure is typical for San Mateo County. The 2012 Grand Jury warned the public it’s leaders were misleading them, it’s now up to them.

SamTrans has hired two consulting firms to help with outreach and creating a technical as well as stakeholder working groups leading up to the November 2018 election. What’s not in this group is the residents of San Mateo County who will be paying for this and who’s Quality of Life is being destroyed.

An inconvenient truth about San Mateo County’s “structural deficit” is that … there isn’t one!