Half Moon Bay City Council voted 5-0 last night to keep the Beaches in Half Moon Bay Open while Monterey County, Santa Cruz County and the City of Pacifica have decided to Close Beaches and Parking Lots.

Back to the Beaches of Half Moon Bay you can’t blame the elected officials in this case, so many moving parts and they don’t get paid for this. The City Manager, Assistant Manager, Sheriff, Chief of Police they do, the Chief who by the way said he would make some calls to see if he could get some extra staff to enforce the closure of Beaches if they voted to close. Think about that, He didn’t say Of Course I will get the extra staff I need to enforce your decision. This is San Mateo County, now known as Silicon Valley and the Police Chief says its going to be tough to enforce it. All five council members were OK with his response.

Even from a simple Math point of view, This is a very bad idea. Half Moon Bay and the SMC Coast experience Gridlock on normal weekends, watch what happens now. This is an invitation to the world the Party is in Half Moon Bay this Labor Day Weekend.

FOR IMMEDIATE RELEASE (Pacifica, CA) – All Pacifica beaches and beach parking lots will be closed from sunrise Saturday, September 5 to sunrise Tuesday, September 8 for the Labor Day holiday weekend. Concern about the continuing, and increasing, transmission of COVID-19 locally and across the state means that over-crowded gatherings, such as usually happens at the beaches on holiday weekends, presents increased health concerns. Closing beach parking without closing beaches creates impacts on Pacifica neighborhoods near the beaches as crowds attempt to park in residential neighborhoods and beaches still become overcrowded. Therefore, for health and safety during this increasing Coronavirus pandemic, beach closures are warranted.

Specifically, the following beaches and beach parking lots will be closed in Pacifica:

Now Mr. Turner has started a Petition for the same reason, He is unable to find any elected official to take charge to protect the Residents of San Mateo County.

Public Safety Officials Urge People to Stay Away from Beaches; City of Half Moon Bay Closes Beaches for the Weekend

“The number one contribution to the fire-fighting effort everyone can make is to avoid the coast” to allow first responders to do their jobs and keep roads clear for evacuees, said CalFire Deputy Chief Jonathan Cox.

Pacifica Mayor Deirdre Martin said, “First responders from across Northern California need to focus on stamping out the vast number of wildfires and protecting lives and property. They don’t need or want to be fighting traffic so someone can enjoy a day at the beach.”  Read the news release.

The City of Half Moon Bay has closed all its beaches through the weekend to discourage visitors and help keep roads clear for first responders and evacuees.

San Mateo County was the only County in the entire Bay Area to remain off of the State of California’s Watchlist. Why was that a goal for the Supervisors and County Manager instead of Protecting the Residents of SMC.

San Mateo County News.com has reported for weeks that the data did not add up. We also contacted County Manager Mike Callagy to explain the additional 15 ICU Beds and Staff that were reported on a single day only to disappear the next day.

Michael,
I don’t know specifically, but I do know many hospitals now are able to easily convert rooms to ICU… it is not like the ICU wards they use to have.  Most rooms now are set up to convert to ICU.
Mike

Its fair to say that a Shut Down is in order until the real data is available.

Why would anybody believe San Mateo County with SFO and San Jose International Airport to the South not be a natural HotSpot. 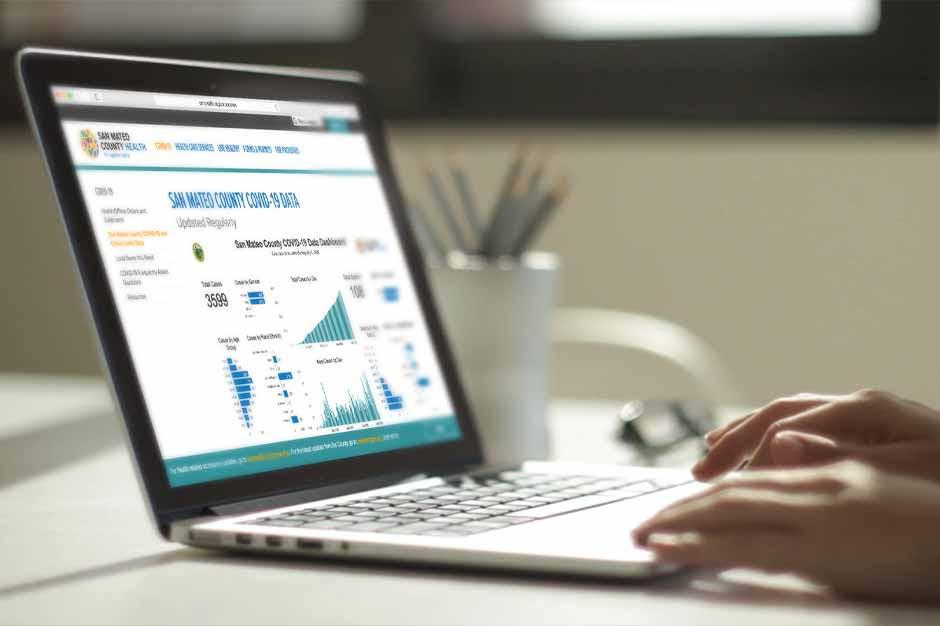 A significant unresolved problem with the State of California’s reporting system for communicable diseases (California Reportable Disease Information Exchange [CalREDIE]), has resulted in significant underreporting of COVID-19 testing results to San Mateo County Health and local health departments state-wide. Local health departments are receiving incomplete information regarding laboratory test results, which affects our ability to identify new cases of COVID-19, to accurately report the testing positivity rate in our community, and to identify the number of persons tested for the last few weeks. Without timely reports of all new lab results, it is impossible for the California Department of Public Health (CDPH) and local health officials to identify the extent to which COVID-19 is circulating in the community. It also hinders our ability to conduct effective contact tracing and case investigations to slow the spread of COVID-19.

The extent of this issue is currently unknown, and the expected resolution date is also unknown.  San Mateo County Health is in conversations with CDPH, working to rapidly resolve this issue and creating new paths for laboratory results to be reported to our County. In the meantime, we are continuing to report the testing data we do receive and will make clear to the public which data reported on our website are affected by this issue. Data currently affected are in the County Data Dashboard, the Lab Testing Data Dashboard, the Cases by City map, and the Long Term Care Facility Data Dashboard. CDPH has confirmed that although received data are incomplete, the data are valid for those results we are receiving. We expect the testing positivity rate, the daily and cumulative case counts, and other data points on the County’s COVID-19 data dashboards to change as more complete test results are reported to San Mateo County Health.

I asked San Mateo County Manager Mike Callagy How many San Mateo County Costco Employees have tested positive? His response was “Michael I do not have that information.” That would be good for the Residents of SMC to know.

The cases were reported to the county by Costco after workers reported their diagnoses to the company.

Where were they tested and by who?

The LATIMES reported today that 31 employees from four locations in Santa Clara County have tested positive for COVID-19.

The largest cluster of coronavirus cases among workers of the warehouse chain’s stores in Santa Clara County — Northern California’s most populous — is the Costco in Sunnyvale, where 13 cases were reported between July 23 and 26.

How does San Mateo County Government tell you that on July 30, 2020 there were 64 New Cases. Where does that data come from? It should come from LAB TESTING DATA. When you look at LTD you’ll see there is NO DATA for July 30, 2020.

Supervisor David Canepa is the problem.

“We have plenty of hospital beds and are ready for a surge. I don’t want to take a step back, but we must all be prepared. This will require an extraordinary effort at every level of government to ensure these businesses do not fail,” said Supervisor David Canepa. You can see he has shifted to protect businesses instead of Residents.

Supervisor Canepa knows his statement is Misleading and False ICU Beds are the issue not Surge Beds.

There was ZERO benefit for not being on this Watchlist since July 15, 2020. It’s difficult to find politicians who are not conflicted with the normal powers that get people elected. The Red Flags are simple to spot in a Pandemic when at first they are for protecting the residents and then the shift occurs to “We have got to get back to Work”

According to the data published by San Mateo County for the last 10 days the County has not maintained the 20% availability of ICU Beds and Staff.

Below you will see ICU Beds Available 3. Remember they are supposed to have 13.

Michael,
I don’t know specifically, but I do know many hospitals now are able to easily convert rooms to ICU… it is not like the ICU wards they use to have.  Most rooms now are set up to convert to ICU.
Mike
Get Outlook for iOS
From: Michael Stogner <michaelgstogner@yahoo.com>
Sent: Wednesday, July 22, 2020 3:30:40 PM
To: Michael Callagy <MCallagy@smcgov.org>
Cc: Jeff Regan <jeff@ssv.com>; Ian MacDougall <ian.michael.macdougall@gmail.com>
Subject: Increased 15 ICU Beds and Staff


CAUTION: This email originated from outside of San Mateo County. Unless you recognize the sender’s email address and know the content is safe, do not click links, open attachments or reply.
Hello Mike,
Can you tell me which hospital/s added 15 more ICU beds and Staff today?
The County has had 67 ICU Beds and Staff from the beginning to yesterday, today you have 82.
Thank You
Michael G. Stogner
San Mateo County News.com