San Mateo County Sheriff Video How not to Arrest a Pedestrian.

This Video should be used Nationwide to all Law Enforcement Agencies. The Unarmed Pedestrian was not drunk, had no Drugs in his system and had committed no crime when the SMCSO Deputy first noticed him and made a U turn.

Sheriff’s Office has No Plan on how to detain a large Black man for jaywalking.

Before you start the video notice the Five names listed. CSO Joesph Gonzales not listed. You’ll notice at the 7:18 mark there are SIX SMC Sheriff Employees involved including CSO using O.C. Spray.

Warning to viewer, this video is of the Homicide of Chinedu V. Okobi by SIX Sheriff Employees October 3, 2018 in the middle of the afternoon.

San Mateo County Board of Supervisors met in Closed Session yesterday Jan. 14, 2020 to discuss settling the Maureen Okobi vs. San Mateo County and 5 of its 6 Employees case.

Maureen Okobi is the mother Chinedu Okobi who was legally walking down the sidewalk on the Millbrae side of El Camino Real at 1:00PM on Wednesday October 3, 2018. After interacting with SIX San Mateo County Sheriff Employees for 9:10 he was completely Unresponsive. When a monitor was put on him 10 minutes later it was Flatlined. At San Mateo County District Attorney’s Office closed to the public Press Conference on March 1, 2019 Steve Wagstaffe was asked by KQED Reporter Julie Small “What was the Manner of Death?” At that point he confirmed what SMCCO Deputy Coroner Heather Diaz reported in December 2018. Chinedu Okobi’s death was ruled a Homicide.

San Mateo County Sheriff Sgt. Trickett was the Incident Commander at the scene. He identified the “Involved Parties.”

So the question is Who & How many San Mateo County Employees/Elected Officials had knowledge and were involved in the False Narrative of FIVE SMCSO INVOLVED PARTIES.

It’s pretty simple if you are willing to Falsify Police Reports, and produce 3 False Sheriff News Releases (Sheriff Carlos Bolanos & PIO Rosemary Blankswade) Why should the residents of San Mateo County believe anything you say or report?

Video prepared and provided by SMCDA on March 1, 2019

Get involved San Mateo County Residents, you are responsible for your elected officials behavior.

December 27, 2018 and signed off on December 31, 2018, Became public on March 1, 2019 after the San Mateo County District Attorney made it available on their website. District Attorney Steve Wagstaffe held a Private Press Conference where he gave a 26 minute presentation of the Investigation of the In-Custody Homicide of Chinedu Okobi. HOMICIDE was never mentioned.

We at San Mateo County News.com can just imagine the pressure she must have felt for simply doing the job she was hired to do. The amount of other SMC Employees who had knowledge of her Homicide ruling and Omitted that word is shocking.

“As the death was the result of multiple measures to subdue Chinedu Okobi by law enforcement, and based on the information contained in the Coroner’s Investigation Report, Toxicology Report, medical records, and multiple videos,

“I have determined the manner of death to be homicide.”

You will notice the District Attorney and Sheriff’s Office only names five names. There were SIX Everybody knows that.

San Mateo County Sheriff Sgt. Trickett was the Incident Commander at the scene. He identified the “Involved Parties.” 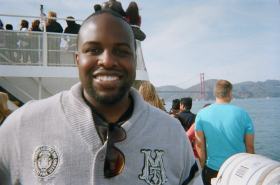 Attorney John Burris filed a lawsuit Friday May 31, 2019 representing Maureen Okobi mother of Chinedu V. Okobi who died in Millbrae, October 3, 2018 In-Custody of SIX San Mateo County Sheriff Employees. Four Deputies, one Sergeant and one Civilian. The Civilian CSO Joseph Gonzales was very involved in the physical take down of Chinedu Okobi and can be clearly seen in the District Attorney’s video at the 7:18 mark dispensing O.C. Spray. You will also notice on the Government’s Video they don’t mention CSO Joseph Gonzales either. So he was not investigated period, Why? The D.A.’s Office treated him as a Witness.

March 1, 2019 Steve Wagstaffe held a private Press Conference for select media, public not welcome. At around 8 minutes into the presentation he stated the Cause of Death by the pathologist to be “Cardiac Arrest”. Reporter Julie Small of KQED asked about 40 minutes later “Do you know the manor of death?” Wagstaffe responded “The Coroner of this County labeled it Homicide.” Why didn’t he say that at the beginning? He went on to say “Homicide occurring during Interaction with that Individual.” That means with the Six Employees.

The law enforcement profession requires integrity and trust and an officer who lies violates that trust and tarnishes the integrity of the profession.

October 3, 2018 at 1:00 PM Millbrae, California, Chinedu Okoki a 36 year old man was walking down the sidewalk on El Camino Real. Within 10 minutes he was Tasered 7 times, sprayed in the face with O.C. spray as six San Mateo County Sheriff Employees were on top of him. He was completely limp, unconscious, and never made a sound again. He died there on the spot in the Custody of the Sheriff’s Office.

San Mateo County Sheriff Sergeant Zaidi was not one of the Six Sheriff Employees involved in the In-Custody Death of Chinedu Okobi. Nineteen days later, On October 22, 2018 he filed an Official Report with the District Attorney’s Office making knowingly false statements.

” I directed Deputy Lorenzatti to remove the metal handcuffs from the suspect which she did, and the suspect was placed on his back. The Fire Department and AMR promptly began CPR.”

District Attorney Steve Wagstaffe on March 1, 2019 provided a video that he and his Team produced for the public it can be found on his website. The placing Chinedu Okobi on his back and CPR starts at the 18:50 mark. The video shows Deputy Lorenzatti did Not remove the handcuffs.

“They were like, well let’s get him on his back and start CPR, So then I, you know helped em, bring him to his back.

Question? “Okay and were his Handcuffs off at that point?”

Answer: No they were still on.

Eng. #37 Mazza Statement: “When decedent was lifted onto the gurney, a police officer cadet or trainee removed the Handcuffs from the decedents wrists.”

AMR #94 Retanubun Statement: “They put the decedent on to a “Mega Mover” when noticed the decedent still had handcuffs on.” “Saw police cadet nearby who assisted them with the removal of the Handcuffs.”

AMR #37 Uhland: “So they laid the decedent on his back with the Handcuffs still on his wrists.”

AMR #94 Pham: “Decedent was on his back with Handcuffs on when he arrived.”

AMR #37 Holman: “When they rolled the decedent over to remove the Handcuffs, she noticed several scrapes on his hands and a few small abrasion on his back.” “She was unsure if the injuries were there prior or if caused by the CPR application.”

According to Wagstaffe’ Video, Chinedu Okobi was placed on his back at 18:26 mark.

CPR starts at 18:50 mark with Handcuffs On and Hands behind his back.

Handcuffs Removed at 28:47 mark after almost 10 minutes of Chest Compressions.

Note: 300 Deputies on the list. Sheriff Alex Villanueva, has called the Brady list a “fake list” and says it was the result of corrupt investigations designed to retaliate against certain deputies.

Should deputies’ misconduct be disclosed to D.A.?

The Taser Part of the story.

October 17, 2018 Senior Inspector Bill Massey receives the AXON data for the Tasers from Sergeant Bob Pronske. It shows 7 deployments from Deputy Wang’s Taser 6 with full 5 seconds discharges and the 7th with a 4 second discharge. So that is 1 Deputy with 7 activations.

Now add at some unknown date Rick Decker who’s boss is Inspector Bill Massey and he changes the story to a few activations.

How does this information keep changing?

All reports can be found pages 53-54 on the District Attorney’s website.