Category Archives: the close relationship between the Sheriffs Office and the Court

How many of you have heard about Munir Edais Very Suspicious Death, in Daly City, California?

There was no good faith Investigation conducted by the Daly City Police Department.

There was no good faith Investigation conducted by the San Mateo County Coroner’s Office.

There was no good faith Reporting to the 766K San Mateo County Residents by the 7 Print Media.

If you haven’t heard anything about Munir Edais death you are in the Majority of San Mateo County Residents.

Please sign the Petition if you think this death should be Investigated.

I love the Fiberglass Freaks Batmobile Teeshirt the Steve Lehto is wearing in todays video.

More than 5 Million Americans know about this Organized Crime activity by the “Those Who Matter Gang of San Mateo County.

August 19, 2022 at 9:00 AM Courtroom 8B is the arraignment hearing that District Attorney Steve Wagsatffe told ABC 7 Investigative Reporter Dan Noyes was CANCELLED.

How many San Mateo County Elected Officials or Candidates have made an official statement on the Batmobile case. I know of only 1.

KGO will be at the court hearing.

San Mateo County should audit this Family Law case to see what really happens in the Family Law Courts. What is currently happening to Shoshana Diengott is happening to thousands of parents across America daily. The goal of Divorce Attorneys is to divide/remove one of the parents from the children/home/pets/and of course all money etc and if you are really good have some criminal charges added into the mix to exhaust what personal time or money you might have managed to scrape by.

One more thing, It’s always more fun when that parent ends up representing herself against a skilled and very well connected attorney in San Mateo County.

The Diengott Family Law case number 20FAM02358-A has all of that.

June 20, 2017 Judges Meeting: The Hon. Judge Lisa Novak: She had made a finding that SMCSO Sergeant Michael E. Otte Perjured Himself in her courtroom on January 5, 2017.

WHAT HAPPENED NEXT to SMCSO Sergeant Michael E. Otte?

How many of San Mateo County Employees knew about SMCSO Sergeant Michael E. Otte committing crimes in the Rachel Amanda Quintana case and did NOTHING to protect the San Mateo County resident.

SMCSO Lt. John Kovach (husband of SMCSO Christina Corpus) was responsible for an Internal Affairs Investigation, How did that “Investigation” go?

What happens when a San Mateo County Sheriff Sergeant files a false Instrument (document) with the court PC115(a) FELONY. Or Lies under oath, for most of us that is known as PERJURY and is a bad thing. Not for Sergeant Mike Otte.

In a response to the Commission on Judicial Performance .

The Commission on Judicial Performance, established in 1960, is the independent state agency responsible for investigating complaints of judicial misconduct and judicial incapacity and for disciplining judges, pursuant to article VI, section 18 of the California Constitution.

Somebody filed a complaint against Judge Novak because she notified all the Judges present at the June 20, 2017 Judges Meeting, She had made a finding that SMCSO Sergeant Michael E. Otte Perjured Himself in her courtroom.

The person or persons who filed the complaint was not concerned at all by the fact that a SMC Sheriff Sergeant would lie under oath in her court, the person and the CJP was only concerned that she informed all the Judges who attended.

She noted the close relationship between the Sheriffs Office and the Court and cited the need to have an unqualified trust relationship with this partner.

Lets look at this unqualified trust relationship with the Sheriff’s Office under the leadership of Carlos G. Bolanos.

San Mateo County former Sheriff Deputy Juan P. Lopez criminal case going for more than 7.5 years with the sole purpose to cause harm to him physically, mentally and financially. The public might recall the big Press Conference claiming Nobody is above the law in San Mateo County and Charging Deputy Lopez with Smuggling a Cellphone and Drugs to a Hells Angel member in Jail. Sheriff Carlos Bolanos knew there was No Evidence to support those charges.

These are just three current examples unqualified trust relationship with the Sheriff’s Office under the leadership of Sheriff Carlos G. Bolanos.

It is my experience that Judges in San Mateo County have allowed Sheriff Employees and District Attorney Employees and County Counsel Employees to lie/file false instruments and give False Testimony on a daily basis, this is the Norm it shouldn’t be.

I say you can’t possibly manage what you don’t measure.

Lets find out exactly what happened after Hon. Judge Lisa Novak made a finding that SMCSO Sergeant Michael E. Otte Perjured Himself in her courtroom.

The Supervisors of San Mateo County made an ordinance and specify by name who is allowed to serve on the Citizen’s Review Panel.

County Government Serves the “BEST INTEREST OF THE CITIZENS OF SAN MATEO COUNTY.” 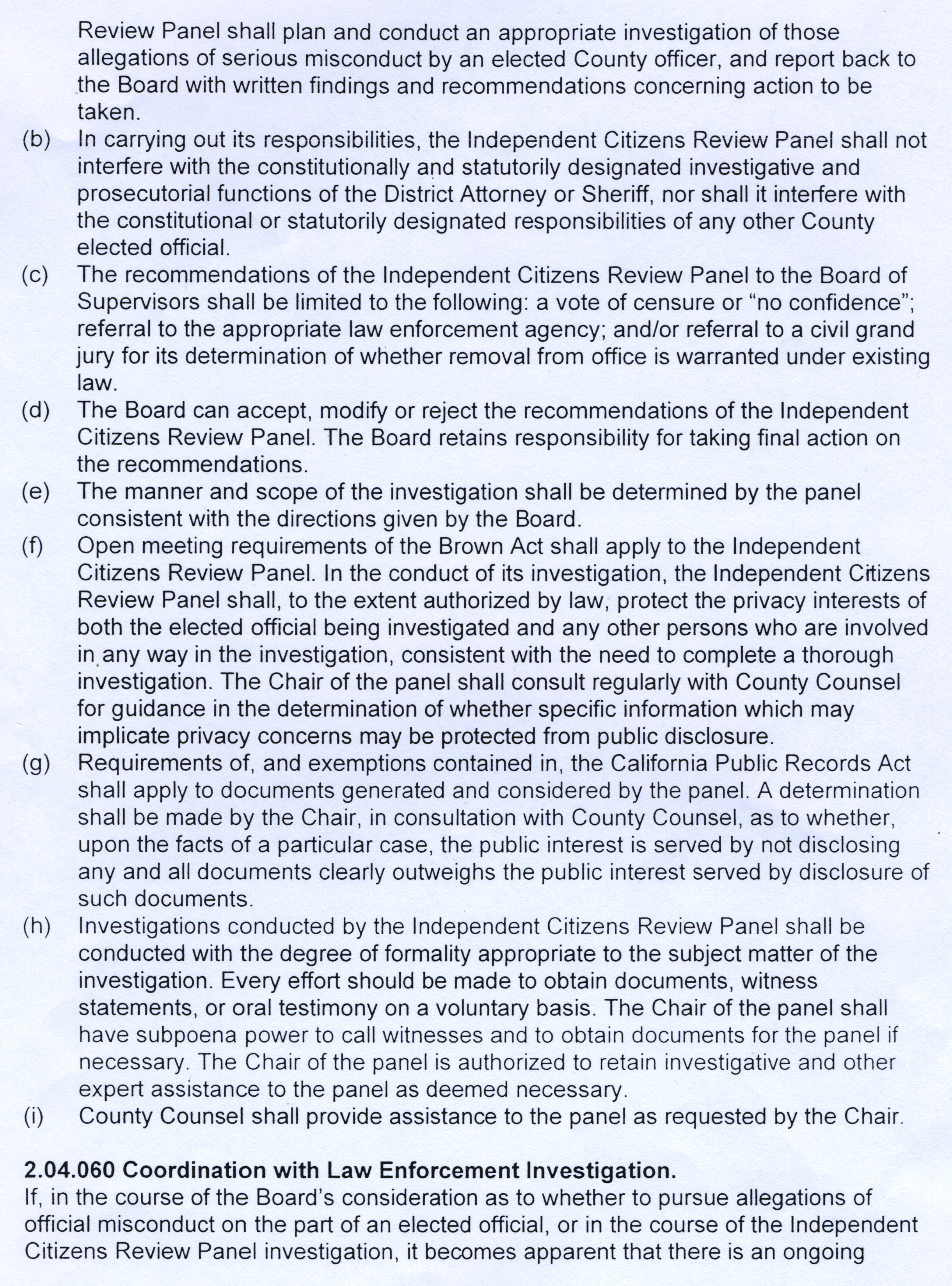 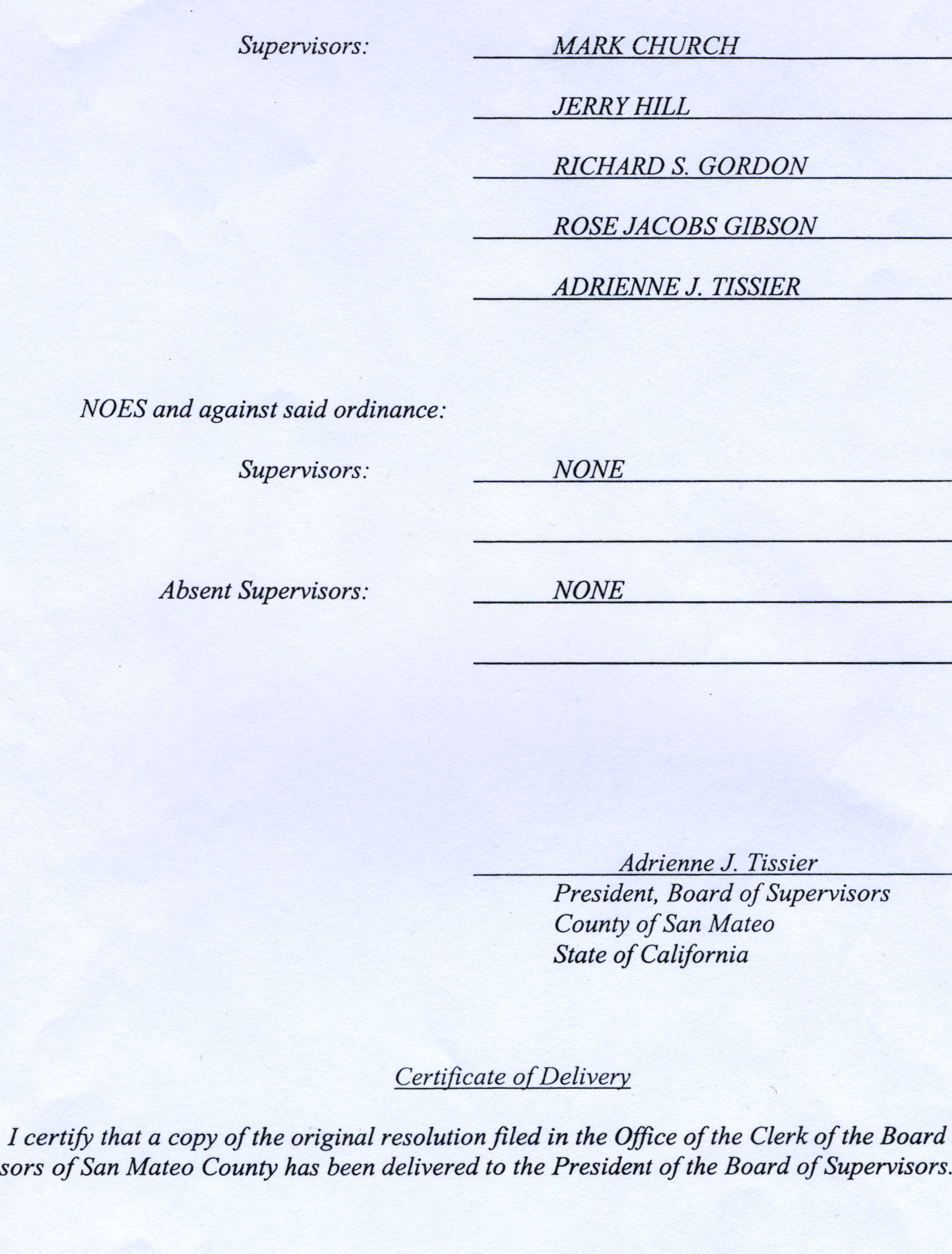 These next two pages list the specific people who are allowed on the citizen’s review panel. They are not required to be residents of San Mateo County either. 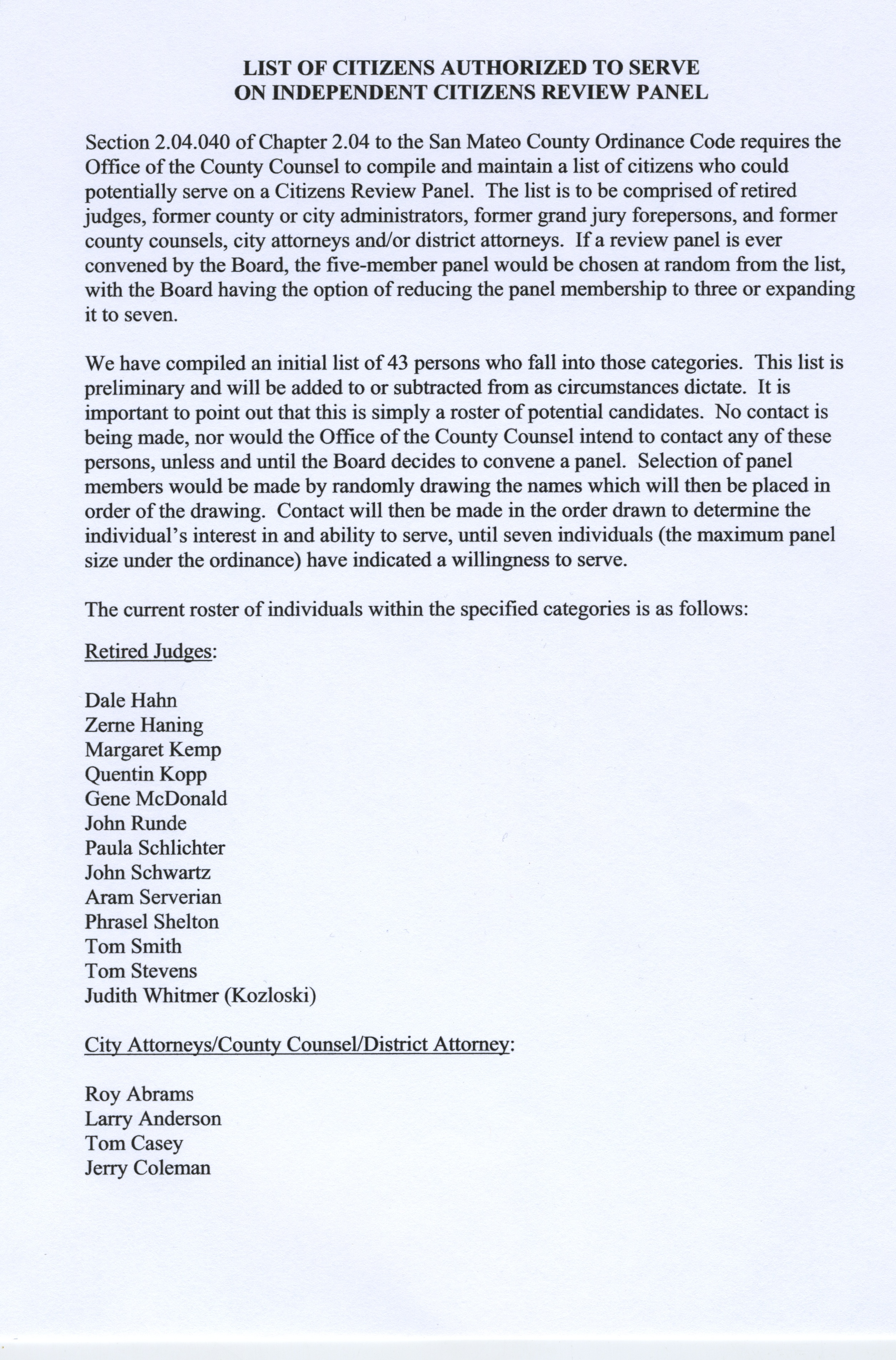 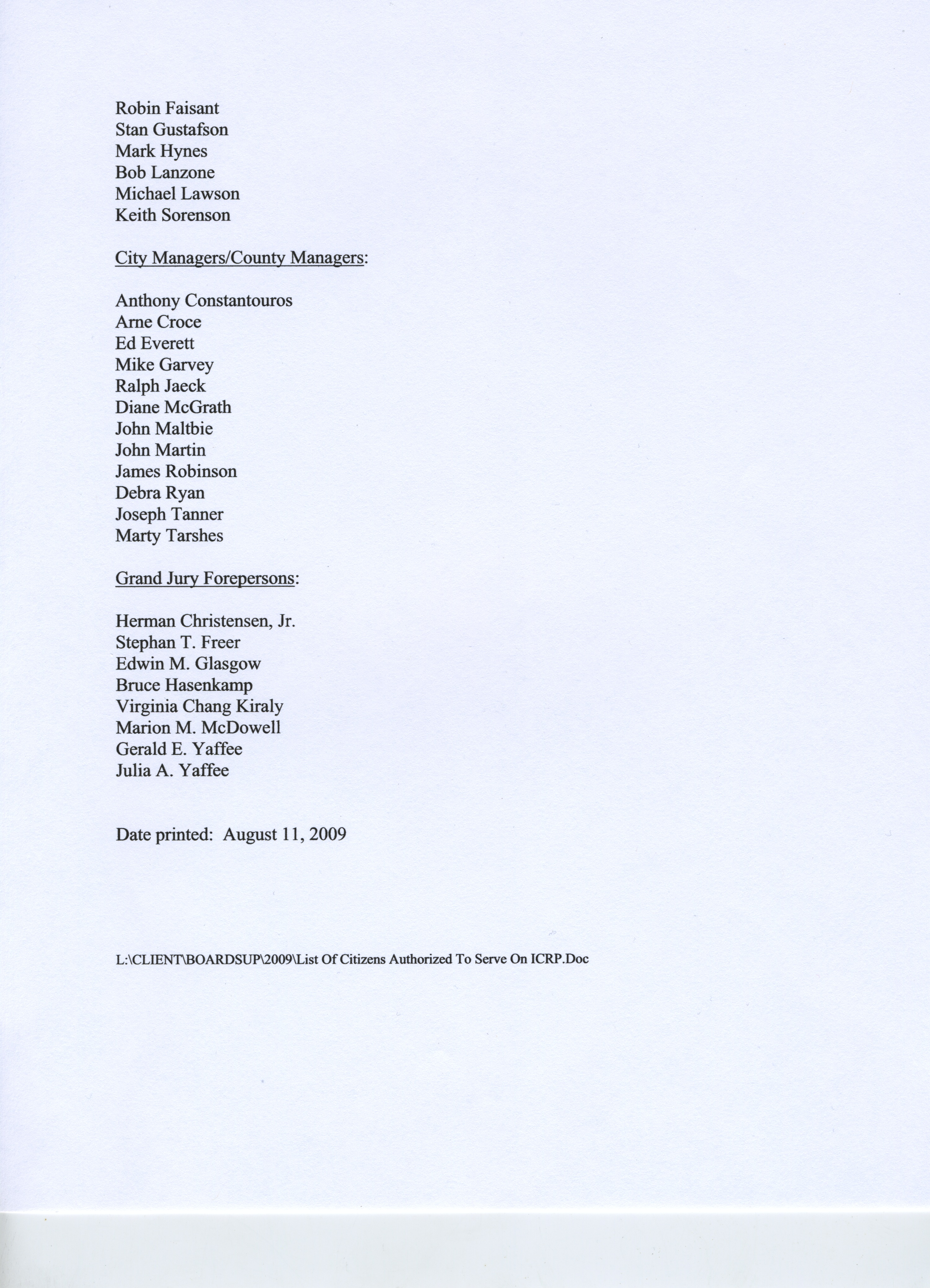